Hi everyone, Martin here.  As I mentioned last week, over the weekend I was given the opportunity to visit one of the UK Jamboree Units at their training camp.  I had been invited by one of their Unit Leaders whom I had worked with in Iceland at the World Scout Moot in 2017.  I left work late, as I always seem to do these days, and set off cross-country to head South, then East then South again so I came off the A1(M) at Junction 62 for the Durham City Park and ride, then five minutes later I pulled into the car-park of Moor House Adventure Centre.  A couple of hours later the members of UK Unit 30, The Angels of the North from County Durham, arrived.

I hung back for the first night and watched the unit and how they interacted with each other.  I have to admit it was really weird.  Those of you who have read our “Meet the Team” page will be aware that my first Jamboree experience, and my second ever international camp, was the 21st World Scout Jamboree, held way back in 2007.  I attended that Jamboree with UK Unit 060, West Lancashire (as I was an Explorer there many moons ago).  As I looked around the hall at Moor House at the social groups that were forming and the way people were interacting with each other it took me back twelve or thirteen years to when I was a participant. The names and faces were different, but I could have sworn all my unit were there.  The personalities I remember going to my Jamboree with were present in that room in a very strange way.

On the Saturday I was asked to run a session on Jamboree life with another member of the IST who had been a participant in Japan.  Here we talked all things from sleep and hydration to Donald Trump and gun control.  I won’t delve into too much detail at this stage because some of what was discussed will form the basis of further top tips posts, but it was interesting to see.  We talked about the high-adrenaline activities, the zip-line, the BMXing, the water-sports day, and the less physically intense days like the Global Development Village and the Faiths and Beliefs Zone.  We also spoke about Culture Day and how this tends to run and some ideas they had for it.  On Saturday evening we had Christmas dinner (which was slightly odd in January).

Sunday I delivered a Scouts Own.  My original plan had been torpedoed on the Friday night so I improvised and spoke a little about how the Jamboree is a journey, and used my “Scouting Everest” metaphor.  I delivered my absolute top tip, “you get out what you put in”, and we sang a song about a journey (Wagon Wheel!).  We had a session on mental health and resilience, which again, I’m going to touch on at a later date so I won’t talk about in great detail here.

Overall it was a really fantastic weekend and I feel immensely privileged to have been a small part of the Jamboree Journey for those Young People (and adults).  I would like to think I’ve helped, whether in alleviating some concerns or fears or just providing a bit of mild comic relief.

I loved the 2007 Jamboree, it was my Jamboree, it was an experience like no other.  But I sometimes feel a bit cheated.  2007 was the centenary of Scouting Jamboree.  It was to celebrate the 100th Anniversary of the first ever Scout camp on Brownsea Island in 1907.  For this reason it was held in the wild and exotic climes of Essex in England.  I am immensely proud that I attended this Jamboree, and one of my lasting memories in Scouting is the Sunrise Ceremony on 1st August.  But, my Jamboree, my Everest, was in the UK.  We never had the pre-event adventures of Sweden or Japan or America.  I never got to do Ho-Ho and stay with a local family or Scout Group because I was the local Scout.

I got to sit and watch a presentation on what the Units will be doing in America.  A 24 hour event in New York City, time in Washington DC after the Jamboree then off on Home Hospitality in (hopefully) Canada before coming back to the UK.  These Young People are going to have the absolute adventure of a lifetime.  The site, The Summit Bechtel Reserve is purpose bought, purpose designed and purpose built for this Jamboree and the Scouts BSA events that come after it.  In 2007 we used Hylands Park and even at that, we shared it with V Festival who came in the week after we left.  16-year old me would have loved the Summit.

I was very jealous – I’m not ashamed to admit it.  I left the weekend feeling a bit down.  All my opportunities to attend an event as a Participant are gone.  I’m too old.  The Canadian Moot in 2013 was the last event that I will ever be a “Young Person” at.  I don’t oppose this, Scouting is at its very core a Youth Organisation, it always has been, it always shall be, and there has to be a line, unfortunately these days I’m on the wrong side of it.

Then, sitting there on the car journey home, still feeling a bit down and not looking forwards to the three and a half hour drive, I remembered a question I’d been asked during my Jamboree life session.

“What do the IST actually do?”

There will be nearly 10,000 IST there for the Jamboree.  We will do everything.  From security to food distribution.  From shop staff to activity leaders.  Without the IST the event simply wouldn’t happen.  There would be no activities, from the GDV to the High Ropes, all cancelled due to lack of staff.  There would be no medical cover, paramedics to doctors, all volunteers.  There would be no-one to manage traffic or unload lorries or even, to put out benches in the various communal areas for people to sit on.

It reminded me, doing 70mph (ish) up the A1 around Newcastle, of a line from Baden Powell’s last message: 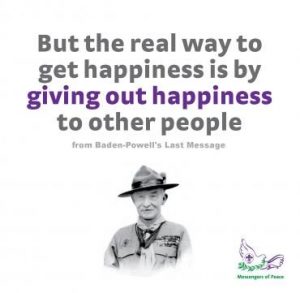 It was the luck of the draw that I managed to attend the Jamboree in the UK rather than the Jamboree in Thailand or Sweden as a Participant.  But it has been my choice to apply for Sweden, Japan and America as IST.  Why do I do it?

Because the Jamboree in 2007 was a life changing experience for me.  It has, in more ways than I can think of, affected me, from confidence to politics I’m sure it’s all been affected positively by that experience.  There were 8600 IST and hundreds of other volunteers and activity instructors who made that Jamboree what it was and provided me the experiences that changed my life.

Now I’m paying that back.  I climbed my Everest and now I’m helping others to reach theirs.  I’m not a unit leader, I have no direct involvement with the Young People – which means I get to make my own adventures whilst I’m in America – but I’m working behind the scenes.  I will be part of a team literally ensuring that everyone will be fed.  It doesn’t sound exciting, but it’s absolutely vital and I’m sure we’ll make it as fun as we possibly can.

My original plan for this post stopped at “mild comic relief”.  I never meant to write the rest of this post.  I started typing and before I knew it I was here.  It’s not really a “Top Tips” post, more of a confession or a soul-bearing exercise  So to bring my inane ramblings to a close, I have a couple of things to say.

Every Jamboree is unique.  And it is a unique experience to every singe person that goes.  To me, this is one of the most special things about a Jamboree.  Even two participants from the same unit who go to exactly the same activities will have totally different experiences.

To those like me who find themselves envious.  It’s a quirk of fate or whatever cosmic eventuality you believe in that you went to whatever jamboree you did as a Participant.  The friendships you made and the experiences you had are totally unique to the event you attend.  There is nothing to say that you would have had a better time on this event rather than *yours* however long ago it was or wherever in the world it was.

You make your Jamboree.  You get out what you put in.  Live every minute of the Jamboree Journey, from bag packs to training camps to the flights to the Jamboree itself.  Throw yourself in at the deep end.  It will be worth it.

This has been a little bit cathartic.  Normal service will resume next week!

2 Replies to “From Young Person to Adult, a different side to the jamboree coin”